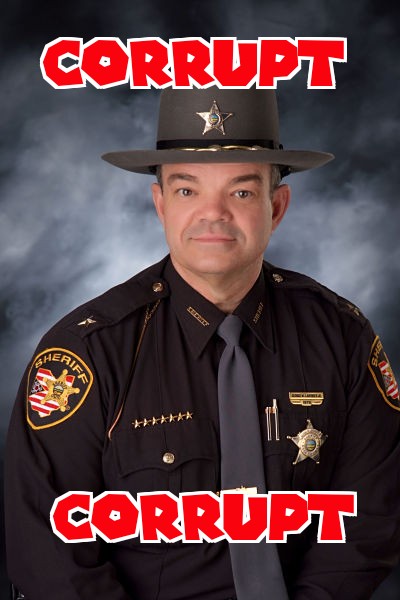 Let’s go over some about this Ross Sheriffs Deputy Ronnie Johnson who came by smashing on my door with no Warrant or Cause or Call by someone (like my neighbors for an example) of me involved in an active Crime, and who appears to be trying to open my Door. I’ve spent about ten minutes of my life getting Harassed and Scared by this clear thug with a badge, so who is Ronnie Johnson?

A quick Google search reveals a tainted past, now before I go over the following, I ask everyone to put Ronnie Johnson in the shadow he casts himself in in the Audio Recording of him above, which I relate to him clearly being a dangerous man.

Now let’s review an incident with Ronnie when he tried arresting two men while off Duty for trespassing on a Quarry where the local police only allow themselves access to for Fishing and Camping (and I suggest some divers go down there, because with Ronnie’s behavior, there could be bodies down there).

Now I say tried Arresting because Ronnie was knocked out and his Gun Stolen. Now if you review the Audio above, and how Ronnie behaves with no Warrant or reason or right to be somewhere, imagine if he gives himself the Right off Duty in the middle of the woods, and he’s the only armed one? Now after dealing with Ronnie appearing to try to be breaking into my apt, twice! With no Warrant or Call from a citizen reporting me in a Crime, or Emergency, I know it’s safe to say those boys were scared for their lives from Ronnie’s out of line allegedly Illegal/Violent Behavior, and I know those young men were in danger from Ronnie the Rouge Officer, and they knocked him out and disarmed him for their safety (which is their Right). Shame those boys went to Prison because I know after dealing with Ronnie those boys were rightly scared for their safety, and obviously they disarmed Ronnie and ran because they didn’t want to be murdered by a mad man. (Links below: News Article and the Legal Case)

Someone seriously needs to look into Ronnie Johnson being the serial killer, and probably send some divers down to that Quarry.

25,231 thoughts on “Is Deputy Ronnie Johnson the Serial Killer?”